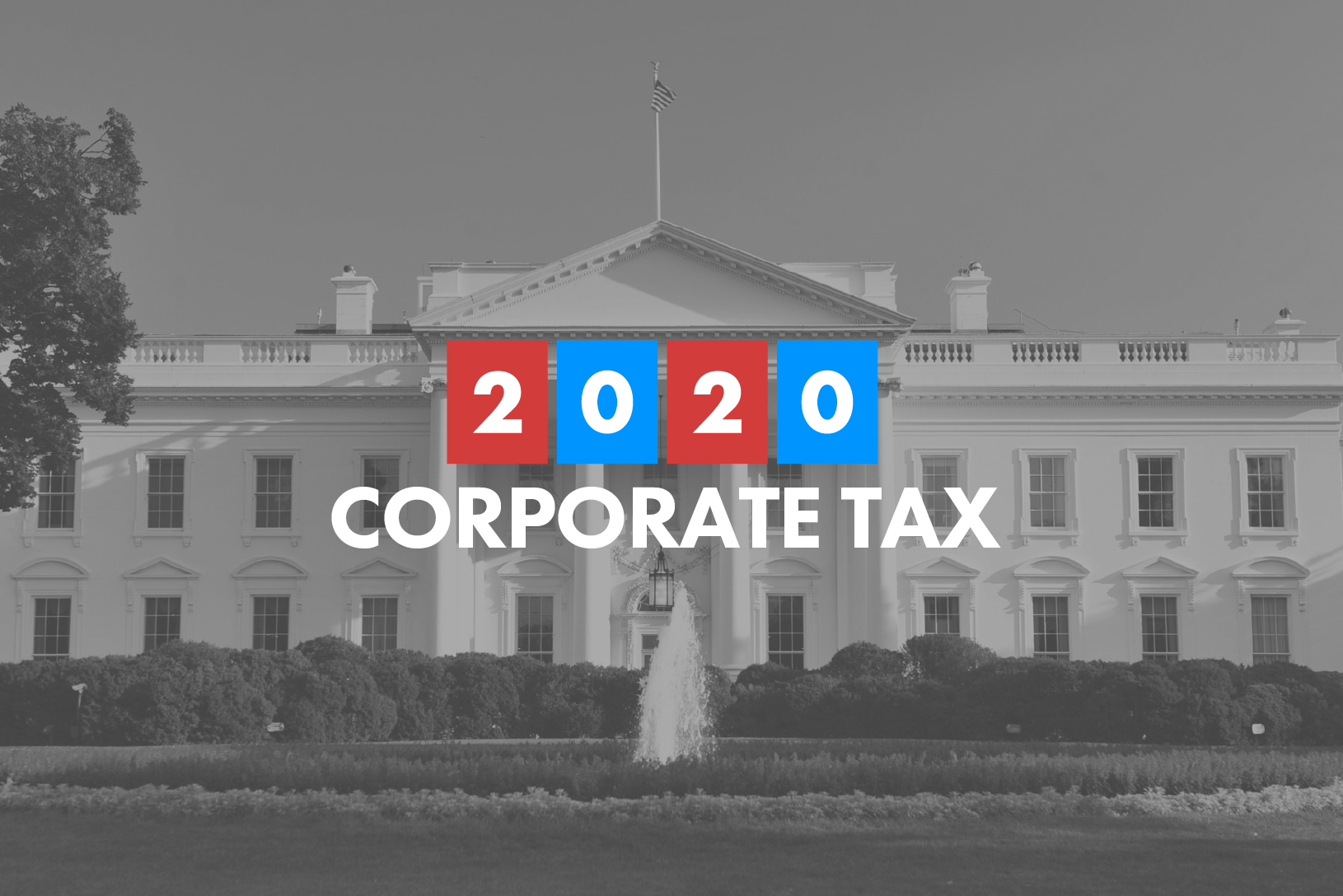 This paper reviews corporate income tax proposals from the 2020 Democratic presidential candidates, including changes to the tax rate, proposed minimum taxes, and depreciation using the Tax Foundation General Equilibrium Model. Each proposal would increase the cost of capital, making the United States a less attractive location for investment. This reduces the size of the economy and burdens taxpayers across the income spectrum.

The Tax Foundation General Equilibrium Model estimates that on both a conventional and dynamic basis, increases in the corporate tax rate would be progressive while burdening taxpayers across the income spectrum.

For example, increasing the rate to 28 percent, as former Vice President Biden and former New York City Mayor Bloomberg propose, would reduce after-tax income for taxpayers in the bottom quintile by 0.53 percent on a conventional basis and by 1.07 percent on a dynamic basis. The drop in after-tax income increases along the income spectrum, with taxpayers in the 99th to 100th percentile seeing a drop in after-tax income of 1.52 percent conventionally and 2.19 percent dynamically under a corporate tax rate of 28 percent.

Biden has proposed increasing the corporate income tax rate to 28 percent and creating a minimum tax on corporations with book profits of $100 million or greater. According to the campaign, the tax is aimed at companies that report net income of $100 million or more in the United States but pay little to no federal income taxes on that due to tax breaks for buildings, investments, employee stock options, or loss carryforwards.[5]

The minimum tax would be set to 15 percent of book profits while still allowing for net operating losses and foreign tax credits; companies would pay the greater of their regular corporate income tax liability or the 15 percent minimum tax.

According to the Tax Foundation General Equilibrium Model, Biden’s corporate tax changes—the proposed increase of the corporate rate from 21 percent to 28 percent plus the 15 percent minimum book tax—would reduce economic output by 1.3 percent. The capital stock would fall by 2.9 percent, wages by 1.0 percent, and employment by 236,000 jobs.

A higher burden on investment would discourage productivity-enhancing investments, leading to lower levels of output, a smaller capital stock, and lower levels of wages than under a corporate tax increase that allows accelerated depreciation deductions. For these reasons, our estimate of the Biden minimum tax is conservative and likely understates the full economic effect.

The Tax Foundation General Equilibrium Model estimates that Biden’s corporate tax proposal would raise $1.553 trillion from 2020 to 2029, on a conventional basis. On a dynamic basis, the proposal is estimated to raise $202 billion less because of lower output caused by the proposal. Wages and profits would be lower, reducing overall collections from the individual income tax, payroll tax, and excise taxes.

The Tax Foundation General Equilibrium Model estimates that Biden’s corporate tax proposal would make the tax code slightly more progressive. However, taxpayers at all income levels, on both a conventional and dynamic basis, would see a reduction in after-tax income.

Warren has proposed increasing the corporate income tax rate to 35 percent and imposing a corporate surtax equal to 7 percent of the worldwide profits reported on a corporation’s financial statement. Under the surtax, the first $100 million in profits of a corporation would be exempt from the tax. Warren has also proposed ending accelerated depreciation and switching to economic depreciation for large businesses. We do not model the effect of the depreciation switch in this analysis because we do not have the details of which businesses would be subject to the change; if these changes were included, the negative economic effects would be larger than what is estimated below.

According to the Tax Foundation General Equilibrium Model, Warren’s proposal would reduce economic output (GDP) by 3.7 percent in the long run. We also estimate that the capital stock would be 8.7 percent smaller and wages 3.1 percent lower.

Notably, the surtax would have a larger negative impact on the incentive to invest in the United States than a 7 percentage-point increase in the corporate income tax rate. This is chiefly because companies would not be able to use expensing or accelerated depreciation for their capital investments.

We estimate that on a conventional basis, Warren’s proposal would raise nearly $3.4 trillion over the 10 years from 2020 to 2029. On a dynamic basis, revenue collections would be lower, at nearly $2.7 trillion. That 20 percent reduction in revenue over the 10 years is due to lower economic output as a result of the tax increases. Wages and profits would be lower, reducing overall collections from the individual income tax, payroll tax, and excise taxes. Total revenue would be $695 billion lower over the decade as a result of the proposal.

Sanders has proposed imposing a 35 percent corporate income tax rate and transitioning to economic depreciation for all investments.

According to the Tax Foundation General Equilibrium Model, Sanders’ proposal would reduce economic output (GDP) by 3.8 percent. The capital stock would shrink by 9.1 percent, wages would be 3.2 percent lower, and employment would fall by 755,000 full-time equivalent jobs.

The tax code under current law allows businesses to deduct the cost of their investments according to the Modified Accelerated Cost Recovery System (MACRS), in which businesses receive larger depreciation deductions in the early years of an asset’s life using the declining-balance method.[6] Under Internal Revenue Code (IRC) Section 179, businesses may deduct up to $1 million of equipment purchases, with the deduction then phasing out dollar-for-dollar beginning at $2.5 million of purchases. Additionally, investments with asset lives of 20 years or less are currently eligible for 100 percent bonus depreciation.

Under Sanders’ proposal of economic depreciation, we assume that businesses would be required to take depreciation deductions in equal increments (straight-line method), according to the Alternative Depreciation System (ADS). Because investment is one of the main drivers of economic growth and relatively sensitive to tax policy, even small changes to the tax treatment of investment create large economic effects. Lengthening depreciation schedules decreases overall investment and leads to a smaller economy.

We estimate that Sanders’ proposal to increase the corporate income tax rate to 35 percent and end all forms of accelerated depreciation would raise approximately $3.87 trillion between 2020 and 2029 on a conventional basis. The revenue gain from switching to economic depreciation is front-loaded, which means that the provision raises much more in its first years than it does in subsequent years. On a dynamic basis, we estimate that Sanders’ proposal would raise about 30 percent less revenue than on a conventional basis. Revenue collections would total nearly $2.7 trillion from 2020 to 2029 on a dynamic basis as output would be lower as a result of the tax.

Sanders’ proposal would make the tax code more progressive, but it would reduce after-tax incomes across all quintiles on average, and middle- and lower-income taxpayers would be particularly affected when factoring in the smaller economy caused by the tax.

This analysis is based on details released by each presidential candidate and their advisors. Ultimately, the impact of each proposal depends on its final details and whether it is applied in combination with other policies that may create interaction effects.

Jamie Dimon details JPMorgan’s strength in annual letter, says US can emerge from crisis stronger
Temporary Work Locations in a Permanent Establishment World
Luckin Coffee is a painful reminder of ‘the extreme fraud risk’ of some China-based companies
Mohamed El-Erian: The stock market could still go back down to new coronavirus lows
TurboTax offers free tool to help Americans who don’t file taxes get stimulus payments